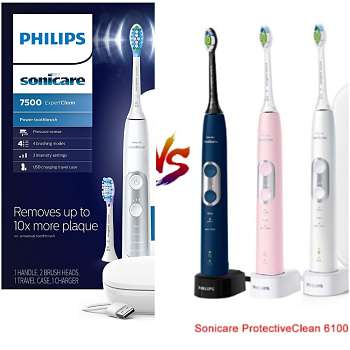 Are you wondering which one to choose between Sonicare ExpertClean 7300/7500 vs. ProtectiveClean 6100? In 2019, Philips introduced a brand new product line named ExpertClean, with an aim of capturing the mid-price point portion of the marketplace in the electric toothbrush industry just like the ProtectiveClean range which came before it. They are both positioned to sit down somewhere in the center of the marketplace – neither inexpensive nor high end. Here below we compare the Protectiveclean 6100 and the 7500/7300.

The ExpertClean 7500 just like the Protectiveclean 6100 can be considered more of a high-end product than a mid-budget market option.

Both the ExpertClean 7300/7500 and the Protectiveclean 6100 use the pentented sonic technology that employs high speed vibrations to produce as much as 31,000 brush strokes per second. This whips up the toothpaste of yours into a froth that forms burbles which penetrate deeper between the teeth crevices and along the gum line for much better cleaning.

However the vibrations are dialed down depending on the cleaning model you are using. Cleaning modes like gum care have reduced brush strokes to protect gums from rapid vibrations While Daily clean and white modes blast at 31000 vibrations per second.

Besides whitening the 6100 is suitable to use on orthodontics /dental works like braces and sensitive teeth.

Meanwhile the Protectiveclean 6100 comes in a selection of navy blue, deep purple, white and pink colours.

All in all as cleaning modes go, the expertclean is slightly superior because the 7300 has a deep clean plus function while the Expertclean 7500 has deep clean plus mode in addition to the ‘white’plus in comparison to the basic clean mode that is present in the Protective.

Below is a breakdown of the specific functions of each respective cleaning mode:

White+/White mode lasts for two mins plus forty seconds.After the 1st two minutes, the brush speed changes up to high energy, that you’re meant to work with to refine the bottom and top teeth for twenty seconds each. The additional time spent brushing ought to help eliminate some surface discolouration and increase surface shine. Once more, even though there is + sign for at least one, these modes do precisely the same thing.

Gum Care/Gum health: this mode runs for two minutes in the regular pristine mode, then simply for an additional minute at a reduced speed, which means you are able to rub and clean the gums better to increase the health of theirs. It is designed to boost blood circulation which promotes healing, therefore in case your gum health is suffering lately then this might be exactly what you are needing.

Clean is the daily regular mode for daily teeth cleaning. It usually lasts for two minutes and is perfect for many people to clean with every day.

but they have very similar benefits with quite similar modes on ProtectiveClean 6100. That is also true of Gum Health and Gum Care, which are also different labels for a similar element.

Both these 2 new models are great at cleaning the teeth.

The ProtectiveClean 6100 is excellent, it has most of the perks in the more expensive Expertclean range to the stage where it is hard to see the big difference other than the number of customizable cleaning modes.

Essentially, it is an excellent toothbrush that provides you with the type of cleaning that you would want.

The 6100 does not come with an inbuilt real time feedback that you would get with a smartphone app, but in case you simply want super clean teeth, next it will not let you down.